Montana, I am told, is a place with bears.  Brown bears.  The big, aggressive kind of bears.  Probably not all of Montana, but certainly the national forests and parks in northwestern Montana.  There are black bears also, but brown bears are literally a whole other animal: bigger, bolder, less likely to back down, and less deterred by injury.  If you’re going to carry a gun for protection from brown bears, it needs to be more than a pea shooter.

I had a bullet in mind to use for this purpose, but it didn’t work out.  The Sierra 300 grain JSP is designed “specifically for large bears,” but I didn’t get good accuracy when I tried it.  Perhaps I could if I experimented more.  However, my trip to Montana is getting close, and after my success with factory ammunition for my SP101, I decided to look at factory ammunition in .44 Magnum.

After looking at several options, my first choice was the Grizzly 320 grain WLNGC hardcast.  This brand used to be sold at Cabela’s, but it appears they dropped them.  I ordered three boxes from MidwayUSA. 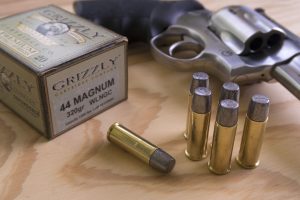 On paper, it was just what I was looking for.  A heavier bullet: 320 grains is even better than 300.  Hardcast for minimal expansion.  A wide meplat: 0.355″ is wider than any other I’ve seen.  A longer bullet (from nose to cannelure) that takes advantage of the extra length of the Ruger’s cylinder.  Buffalo Bore and HSM both had reasonable options, but they were only 305 grains and had a much smaller meplat.  The offering by Grizzly seemed ideal.

I tested a box at the range.  They seem like they could be quite accurate, but it’s difficult for me to know, because I have such a bad flinch.  It seems like, when I didn’t flinch, they left nice crisp holes on my 1″ sticker (at seven yards).  A better handgun shooter than I would have to judge the accuracy.  In any case, they are accurate enough to hit a bear at the distance I would be shooting at one.  They had low muzzle flash and a stiff recoil.

All in all, I am very happy with this load, and I will carry it confidently later this summer when I am camping in Montana.