The Pawnee National Grassland is located in northeast Colorado.  As the name would imply, it is a large expanse of grassland, relatively flat, set aside for public use much like the National Forest system.  It is a very beautiful place, and very peaceful.  Except, perhaps, for the cows. 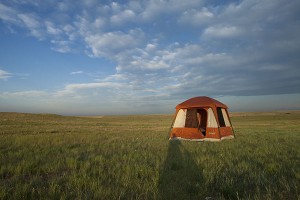 There are three small developed campgrounds at the Grassland.  My original plan was to camp at one of these.  However, at the time I was making reservations, the campgrounds were closed due to recent flooding.  I decided to do what is known as “dispersed” camping, which is basically to camp in undeveloped land.  This is allowed in both National Forest and National Grassland, and it opens many possibilities, so long as you are fully prepared to “rough it”.  Also, it’s free!

When using either a National Forest or National Grassland, one has to be careful to know where the public land is.  Most maps, including Google Maps, will show the area as one big block.  However, inside this block is still quite a big of privately owned land.  To avoid trespassing, you need a detailed map from the Forest Service, which you can order from their Map Store.  The white areas in the map indicate privately owned land, so as you can see, most of it is not public land.

The grassland is evidently available for use by cattle ranchers, who are allowed to let their cattle graze there.  This means I was sharing the pasture with cows.  There were none nearby when I arrived, but there were cow patties.  The cows in the distance are always making some noise, but at about 1am, I was awoken by a cow that was behaving strangely.  It would moo loudly and repeatedly, and between each moo it would suck in a wheezing breath.  It would do this for several seconds, and then walk for a while, and then repeat the whole procedure.  Knowing nothing about cow behavior, it seemed sick to me.  I woke up because it was getting loud, and as I listened, it was getting louder.  I realized it was coming toward me.  I imagined a territorial bull not liking my scent and protecting its herd.  I wondered what a bull would do to a tent, and me in it, if it was sufficiently disturbed.  As it continued to get closer, I decided I would be better off outside of the tent and near the truck.  I threw on some clothes and took cover near the truck.  With binoculars, all I could see was a silhouette, and I couldn’t tell if it was a bull or a cow.  In any case, its proximity turned out to be just coincidence.  It slowly followed a line of travel which brought it past my campsite, but no closer than fifty yards.  I eventually got back into my tent and resumed my sleep, losing about an hour to the mad cow.

When I arrived, and for a few hours into the night, it was quite windy.  I would estimate 25-30 mph winds.  My new tent had reviewed well for standing up to high winds, and this put it to the test.  It was a clear night with lots of stars and a nearly full moon.  Aside from the cow, it was a beautiful night.